BOSTON — The Yankees have reached the postseason in each of Aaron Boone’s four years at the helm, but each appearance has accompanied a conclusion that the manager describes as “cruel,” with the team again emptying lockers without adding a 28th championship to the trophy case.

Those losses — the latest of which was a 6-2 defeat to the rival Red Sox in the AL Wild Card Game — have grown more difficult to swallow, and though Boone addressed changes that he believes are necessary for the Yankees to advance deeper into October, he also acknowledged that his current agreement to manage the club expires after the World Series.

Boone piloted the Yankees to back-to-back seasons of 100 or more victories in 2018 and ’19, taking the American League East with 103 wins in ’19. New York finished 33-27 in last year’s pandemic-shortened season, then won 92 games this year — the club’s third second-place finish under Boone.

Outfielder Aaron Judge said that he believes Boone is the right person to lead the Yankees to a championship.

“When you’re the manager of this team, you wear the ‘NY’ and wear these pinstripes, it’s a heavy burden,” Judge said. “A guy like Boonie wears it with pride, shows up to work every single day ready to go, gets us prepared the right way, keeps us motivated, gets on guys when he needs to.

“It’s been a pleasure the past couple of years getting the chance to play for him and fight for him. I could spend all night sitting here with you giving you reasons why I think he should still be the manager. He’s just a special person, a special coach and we hope for more in the future.”

General manager Brian Cashman has said that he hopes Boone will have a decade-long run as the Yanks’ manager, pointing out that both of his previous skippers enjoyed stability once thought to be impossible in The Bronx: Joe Torre (1996-07) and Joe Girardi (2008-17).

Yet Torre and Girardi both won championships early in their tenures. Torre oversaw a dynasty that delivered titles in 1996, ’98, ’99 and 2000, while Girardi inaugurated the new Yankee Stadium with the franchise’s 27th crown in ’09.

Thus far, Boone’s clubs have only made it as far as the sixth game of an American League Championship Series (2019 vs. Astros).

“He’s been great,” outfielder/designated hitter Giancarlo Stanton said. “We’ve been here the same amount of time, so we’ve seen each other grow in this uniform and been through it all together. So it’s been great.”

“I’ll walk out of here tonight proud of what a lot of people have done since I’ve been here,” Boone said. “I love going to battle with all these guys: players, coaches, support staff, front office. So we’ll see what happens on that front. But whatever does happen, I’m at peace with. I know that I can hold my head high.” 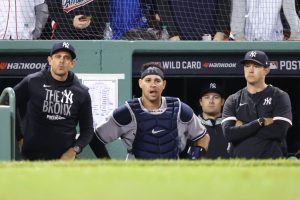